Up in the air! 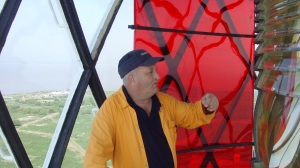 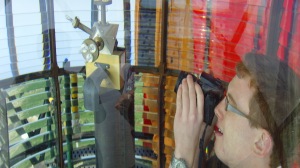 Here are some  photos from the balcony of the lighthouse and inside the lantern room. Like all lighthouses across England and Wales today, Flat Holm is fully automated and solar powered. The Corporation of Trinity House is the General Lighthouse Authority for England and Wales, but also The Channel Islands and Gibraltar! It was established in 1514, receiving its royal charter from Henry VIII and today it provides the key aids to navigation of lighthouses, lightships, buoys and radio navigation systems. Trinity House successfully operate 72 lighthouses and nearly 600 aids to navigation!

Like all lighthouses across the UK, Flat Holm’s lighthouse has evolved over time; the first light was kindled in 1737, using a coal fired brazier, which greedily consumed a whopping 25 tons of coal each month! In 1819 after the tragic loss of 40 lives from the ‘William and Mary’ running aground (which was blamed on the inadequacy of the Flat Holm light), the massive circular stone tower was adapted to make a suitable base for a lantern enclosing an oil-based lamp. The light was only converted to electricity in 1969, and finally to solar in 1997, which it still runs on today.

Despite huge advances in modern technology and particularly satellite navigation systems (Differential Global Positioning System), it seems that traditional aids to navigation will continue to play a key role in the future of shipping safety. At least for the foreseeable future anyway! Thanks to Trinity House (Terry – technician) who showed us around the lighthouse and answered our long list of questions! Cheers…

This entry was posted on April 22, 2011 by Flat Holm Island. It was filed under Uncategorized .