For the last 30 years the Flat Holm Project has successfully been operating a gull ringing exercise to study the lifespan and the migratory habits of our resident Lesser Black Backed Gull colony, and this year is no different.

Last weekend the island team were delighted to welcome Richard and James (our professional bird ringers) along with their current trainees and several members of the Flat Holm Society. The brief, as normal, was to ring 100 of the young gull chicks before they are ready to depart the island following the breeding season. 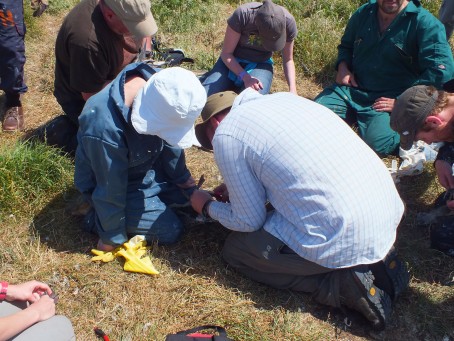 Above: Richard and Lynda fitting a ring to one of the chicks

Each chick is fitted with a coloured PVC ring marked with a unique alphanumeric code on their left leg, and a corresponding smaller metal ring on their right leg. Each member of the group was able to sample each stage of the process, from catching the gulls to actually fitting the rings. Other members of the group were also able to spend time searching the colony for gulls that have been ringed in previous years.

Choosing the “correct” chicks to ring was a very important part of the process, as it is in the interests of the exercise as a whole that they are able to survive into adulthood. This ruled out choosing the smaller and weaker chicks despite them being far easier to catch! 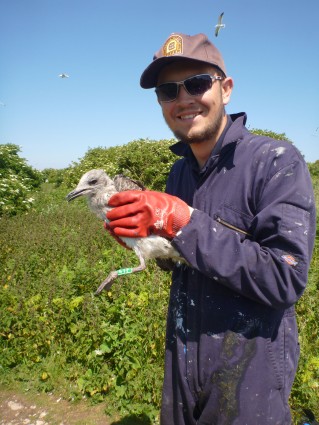 Above: Dan with one of the chicks that the team ringed. Its green and white ring reads 4TF.

With everybody having a great time and all 100 rings being applied throughout the colony the weekend can only be regarded as a complete success, and hopefully the gulls that we have ringed will go on to be re-sighted both here and abroad in the years to come.

This entry was posted on July 10, 2013 by Flat Holm Island. It was filed under Uncategorized .